openSUSE 12.1 has been released on Wednesday the 16th of November 2011. This release brings many new improvements from the desktop to the underlying infrastructure and also marks the introduction of GNOME 3.2, ownCloud, Snapper and much more.

openSUSE 12.1 brings you upgrades to the latest Free Software desktop and server technologies as well as unique features, like the new Snapper tool bringing file change monitoring and rollback functionality to openSUSE. Read on to get an overview of what's new in openSUSE 12.1


openSUSE offers you the choice of four officially supported major Free Desktops, all with a high level of polish and support. Noteworthy is the fact that openSUSE is the first major Linux distribution to ship color management tools for both the GNOME and KDE desktops!

Read on for more details on GNOME 3.2

The innovative new tablet project from the KDE community, Plasma Active, is not an integral part of the openSUSE 12.1 release yet but tablet users can install Plasma Active in openSUSE 12.1 and we work on integrating it in the next openSUSE release.

Learn more about KDE's Workspaces and applications in openSUSE 12.1

The other desktops
Both Xfce and LXDE have not seen a major feature update since the previous openSUSE release, but minor improvements have been made and are included in this release. This includes better theming and desktop integration as well as an improved selection of applications part of the default selection for each desktop. openSUSE also has KDE 3 packages available again.

Web surfing and serving
On the client side, openSUSE 12.1 introduces Chromium 17 to the standard repositories. This WebKit based web browser from Google offers a convenient UI and incredibly fast browsing. The default openSUSE browser is Firefox 7.

On the server side, the WebYaST remote system management tool offers a much improved web interface to administer openSUSE systems remotely with new modules and better performance. The introduction of the Groupware framework Horde 4 brings a powerful set of applications including a modern Webmail client and a PHP based framework on which it is all built.

Supporting Cloud technologies
openSUSE is an excellent guest OS for the cloud as can be experienced building solutions on SUSE Studio. With a new kernel, openSUSE is now ready to run directly on the Amazon EC2 cloud. On the host side, the latest virtualization technologies including Xen 4.1, KVM and VirtualBox can be managed with the latest virt-manager and open-vm-tools. Last but not least, openSUSE is the first Linux distribution to ship OwnCloud integrated into the desktop. And the openSUSE Virtualization and Cloud repository for openSUSE 12.1 offers the latest versions of Eucalyptus, OpenNebula and OpenStack for openSUSE 12.1.

read more about the administration and cloud tools in openSUSE 12.1


openSUSE introduces a number of improvements and innovations in the underlying technology of the distribution. This includes the unique Snapper tool offering file versioning, the systemd init system and the Google Go language.

Snapper rolls back changes
openSUSE 12.1 is the first Linux distribution taking advantage of the snapshot functionality in the upcoming Linux file system btrfs. These snapshots of the file system are using copy-on-write, making them very space efficient. openSUSE 12.1 debuts Snapper which allows the user to interface with this technology.

The command line and GUI Snapper tools allow users to view older versions of files and revert changes. The unique integration in the zypper package manager of openSUSE allows users to roll back entire upgrades or software installations with the accompanying configuration changes.

systemd boots your system
systemd is the new init tool in openSUSE, controlling and speeding up the boot process. Developed in close cooperation with fellow Linux Distribution Fedora, systemd is especially interesting for system administrators due to its powerful socket- and bus activated service system. It also works closely with the cgroups kernel feature providing better security and control over the processes.

Write in go, compile with Clang or GCC
openSUSE is proud to be the first major distribution to ship the new Go programming language from Google as part of our release. Go is a fast, easy language good in handling multi-core, networked machines with the convenience of garbage collection and run-time reflection.

openSUSE 12.1 also comes with the just-released LLVM3 compiler tool and clang, the C/C++ compiler building upon LLVM. LLVM is employed by the open source ATI and NVIDIA accelerated graphics drivers and thus forms an integral part of a high-performance graphics stack on Linux.

Lastly, this openSUSE release is build with GCC 4.6.2 and link-time optimization, improving the overall performance of the software in openSUSE 12.1. 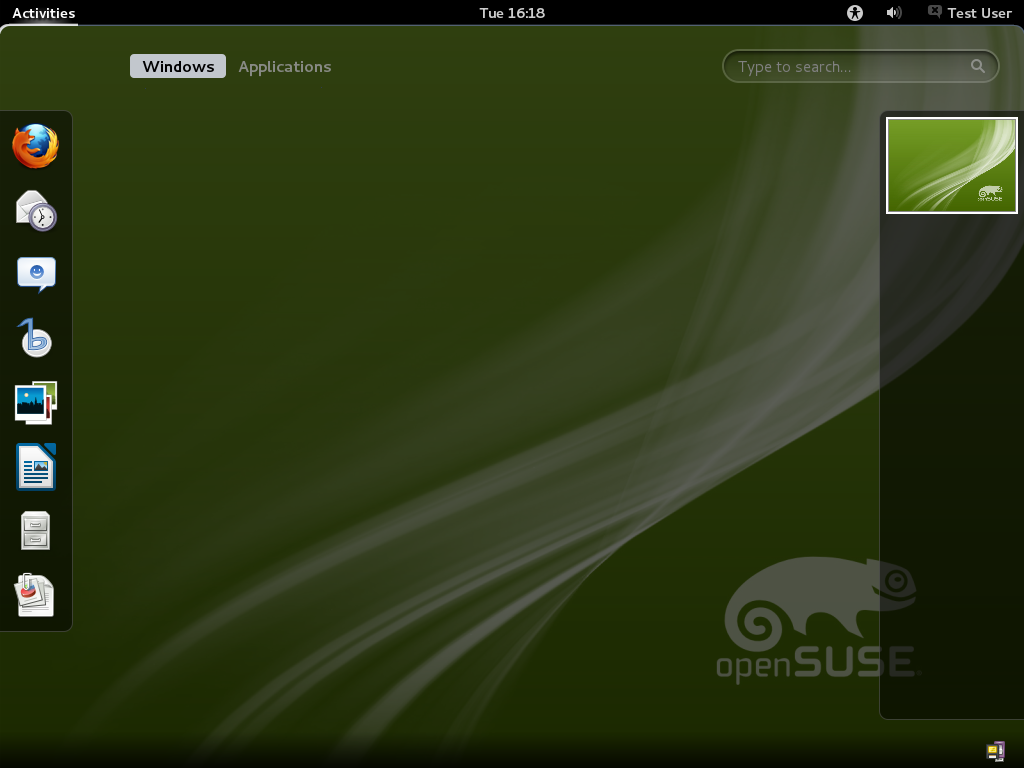