This is a proposal for the openFATE process, please help fleshing out the process - and start evaluating features so that we see how it works.

A feature that gets implemented is initially "Unconfirmed", then moves through states "New", "Marketplace", "Implementation" to the state "Done." A feature can move anytime to the states "Duplicate", "Rejected" or also "Done" (if we notice it's done already).

Until feature is marked as Done or Implementation, it stays in the "openSUSE Distribution" product as it's not clear when the feature will be really done.

The process (source of file) can be visualized as follows: 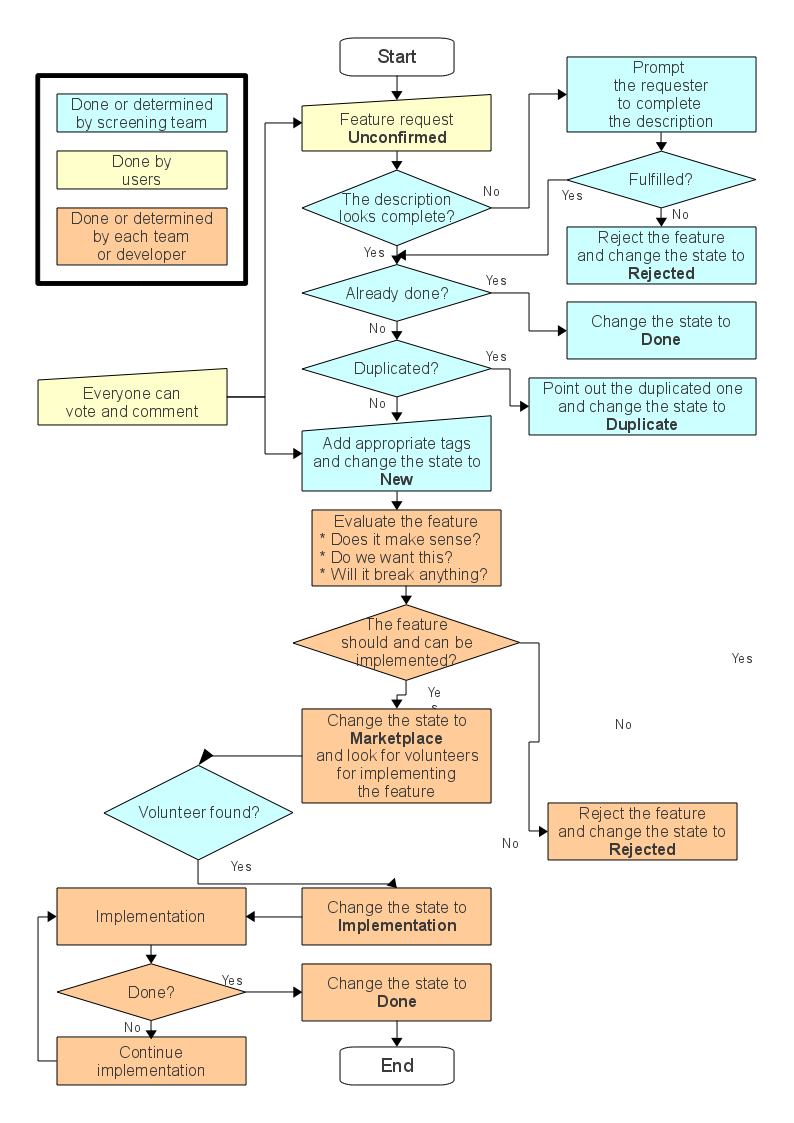 This is the transition from "Unconfirmed" to "New", "Done", "Rejected" or "Duplicate":

This is the transition from "New" to "Marketplace" and is an evaluation by an area expert. An area expert searches for features with specific tags and handles them:

Starting to implement a feature

At this point of time, feature should be moved from "openSUSE Distribution" product to particular openSUSE release, e.g. "openSUSE 11.4".

Note that there can be more than one developer.

This is the transition from "Implementation" to "Done". The developer marks the feature as done once it's done.

Since we have the vote system for features, the more voted features should have the higher priority in principle. But as mentioned above, even if a feature is very important and interesting, we can't implement it if there's no one who can and will do. So my proposal is as follows:

Cleaning up after a release

Past experience shows that after a release there are still features that are open. So, an evaluation needs to happen on what to do with them. The evaluation will do:

If a feature was not done for the last release, it can be moved to the next release (just create a new product and mark the feature as "New" since we want to have some evaluation again). To not postpone features forever, let's use the following rule:

For the openSUSE distribution, we have to evaluate features early so that they can get implemented.

Here's a proposal for timeline and goals:

Bugzilla has an explicit NEEDINFO state. openFATE has no separate state but instead allows to have several people with the role "infoprovider".

Note that for implementation features the role "developer" is used. For some features, the "developer" will be a system administrator or an artist. Basically "developer" means the person doing the actual work - the "implementer".

What does rejection mean?

Rejecting a feature does not necessarily mean that the feature is bad, it often means that the openSUSE project does not want to push this feature on its own and instead focus on other features.

Rejection can happen because of:

Therefore, it might make sense to open a feature again for a newer release. Also, if you really want to have a feature in which was rejected because nobody volunteered doing it, you can implement it yourself and ask for the integration of it - even if the feature was rejected.

Part of the screening work when setting a feature to 'new' is adding a specific tag so the responsible expert group gets notified about the feature. They will then evaluate it and push it to the marketplace eventually.

These products are owned by other teams that will work on features according to their own processes:

Let's decide on how to handle specific situations and add also friendly standard texts. Below are some proposals, please enhance them:

Bugs should be filled in bugzilla, you can use the following text for rejecting features:

Please report this as bug via bugzilla, details can be found via http://bugs.opensuse.org.

A package wish is a wish for inclusion in the next openSUSE distribution release. The first step is to build the package in the openSUSE Build Service, the second step is to get it into the factory distribution.