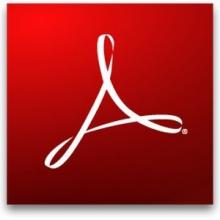 Adobe Reader is used for viewing, printing, and annotating PDF documents. It can open and interact with all types of PDF content, including forms and multimedia.

PDF is a standard. See the Wikipedia: Portable Document Format article that reads in particular:

PDF remained a proprietary format, controlled by Adobe, until it was officially released as an open standard on July 1, 2008, and published by the International Organization for Standardization as ISO 32000-1:2008. In 2008, Adobe published a Public Patent License to ISO 32000-1 granting royalty-free rights for all patents owned by Adobe that are necessary to make, use, sell and distribute PDF compliant implementations. However, there are still some technologies used in PDF files, that are defined only by Adobe and remain proprietary (e.g. Adobe XML Forms Architecture, Adobe JavaScript).

Thus there are many applications to view and edit or create PDF files, but not every application supports all the features. Adobe is inventing new features that take some time to go into the published standards. Only the newest version of the Adobe Reader supports all those features invented by Adobe.

The Adobe products and Enterprise Technical Support periods covered under the new Lifecycle Policy listing shows the release cycles for Adobe Reader and other products. The Adobe Reader version 9 had end of support since July 2013. The new versions 10 and 11 (Adobe Reader X and XI) are not available for Linux.

Adobe Reader is non-free proprietary binary-only software from Adobe so that there is nothing that openSUSE could do regarding any issue.

openSUSE includes various PDF viewing tools like Okular, Evince, MuPDF, poppler-tools and so on. These tools are actively maintained and get security fixes from openSUSE and their upstream authors.

As of mid-2014, Adobe no longer publishes any GNU/Linux version of Adobe Reader, and has pulled the latest version (Adobe Reader 9) from its download sites.

As of this writing (Nov. 2013) Adobe Reader is the only PDF viever supporting all features. For instance, XFA forms with JavaScript, document signing and signature verification are not supported by the poppler tools, which means that Okular and Evince can not. MuPDF shows promise, but it is unfinished.

Forms with JavaScript: You notice that these forms do not fully work when you press the buttons inside the form and they do nothing. This may matter or maybe not. Often the form prints perfect and can be filled using Okular or Evince. It is by careful comparison with the behavior on Adobe Reader when differences can be evaluated and perhaps ignored.

A sample PDF file with forms can be obtained here or perhaps here.

Adobe Reader 9 was the most recent version for GNU/Linux, but as of mid-2014 it is no longer distributed by Adobe. It may still be obtainable from third-party repositories, though of course these receive no security updates. It may be reasonably safe to use Adobe Reader 9 after disabling JavaScript, disallowing it from using the Internet, and caging it with AppArmor. It is up to the administrator, but of course, openSUSE can not be blamed if something wrong happens.

The only Adobe Reader known to work well under Wine are versions 8 or 9. However, these versions no longer receive updates from Adobe, so using them is as bad as using the native Linux version 9. Version X or XI are not currently installable under Wine, but this may change soon, according to this article Wine 1.5.25 Fixes Adobe Reader XI Installation. As of Wine 1.7.2 this does not work with default Wine settings on OpenSuse 13.1.

Adobe Reader X and XI on an Android virtual machine

It runs fine, but the user interface is awkward: it emulates a tablet, but it is not a real tablet so that you can not swipe at the screen. The keyboard support is limited: PgUp/PgDn do not work.

This is an article about How to Install Android in VirtualBox. It works equally well on VMware (make sure to choose an IDE virtual disk, it does not work with SCSI). You can obtain Android for the x86 (32 bits) from here android-x86.

Adobe Reader X and XI on a Windows virtual machine

Works perfect, of course - but you need a non-free Windows license.

There is a Linux version of Foxit Reader, but it is old (2009) and has security issues; thus you have to use a current Windows version instead, either in a virtual machine or under Wine.

Wine can be installed from the OSS repository, or a newer version from the "Emulators:/Wine" repository (install wine-mono too).

Foxit Reader can be installed without problems, run "wine whateversetup.exe". A desktop icon gets installed on your desktop. Some say that they have associated Foxit Reader with PDF files.

Signature checking does not work. Foxit Reader wants to use Microsoft Windows provided "Signature-Store" which is not available in Wine.