The GSOC 2011 (Google Summer of Code) Project OBS Mobile aims to improve and extend the mobile interface to the openSUSE Build Service. This is a mobile version of the webclient, making use of the jquery mobile framework. An Android app just wraps this interface and makes it available to the market. The current functionality is quite limited, so we should go ahead and extend it in the areas of reviewing of submit requests, displaying project build status... 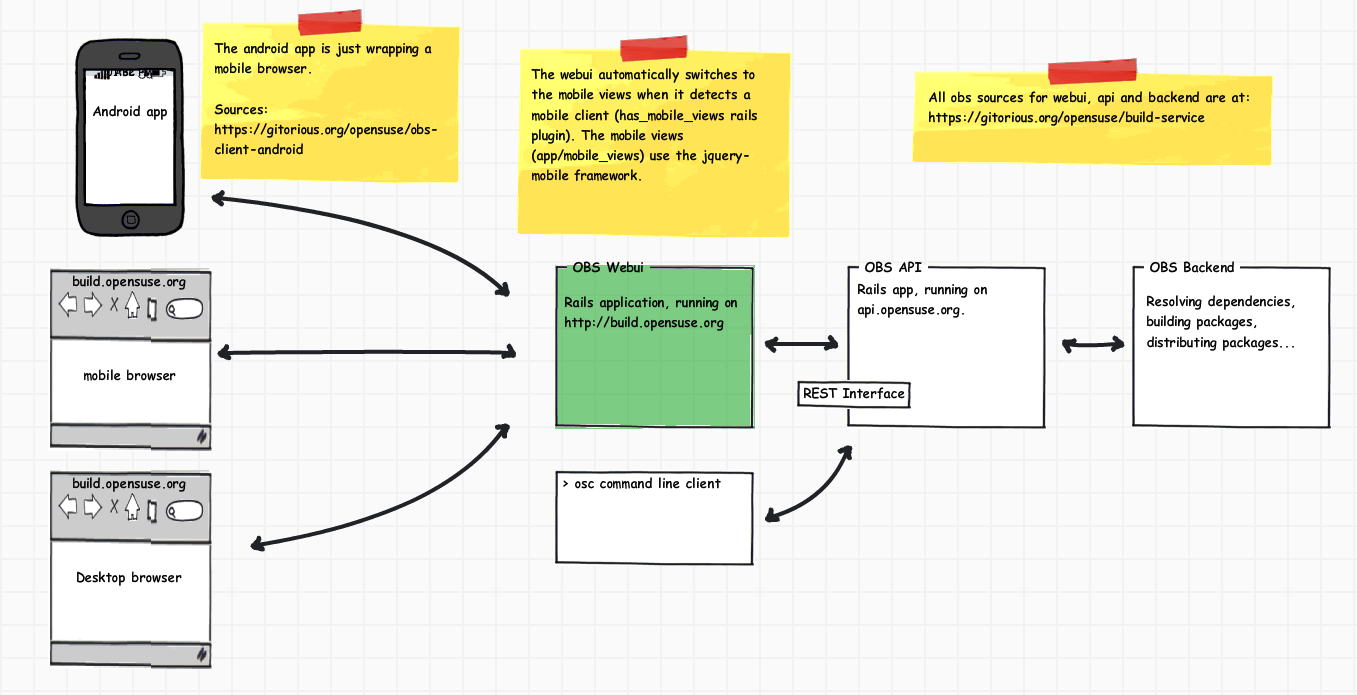 Architecture of the mobile interface

Set up a local development instance of the build service webclient ( test with browser: http://localhost:3000/?force_view=mobile )

Created a branch of the project: https://gitorious.org/~justineleng/opensuse/justineleng-build-service. Will be sending merge requests from there.

Currently, the openSUSE Build Service (OBS) mobile client offers very limited functions. I would like to improve and extend the OBS mobile interface for Android. The goals include not only adding powerful functionalities such as sorting requests by different criteria and enabling real-time user actions, but also integrating a mobile test-suite for each new feature, and ultimately improving the overall user experience that will make the OBS mobile interface more efficient and convenient to use.

Currently, the OBS mobile client offers only a few basic functions such as browsing projects and packages, checking the build status, and listing requests. This project aims to improve and extend the functionalities of the OBS mobile interface for Android. The tasks include not only adding powerful functionalities such as sorting requests by different criteria and enabling real-time user actions, but also integrating a mobile browser-based test-suite for each new feature, and ultimately improving the overall user experience that will make the OBS mobile interface more efficient and convenient for developers to collaborate and release software directly on their Android devices. The OBS mobile interface makes use of the jQuery Mobile Framework (currently jQuery Mobile Alpha 3), which has a full suite of AJAX capabilities. An Android app wraps the mobile interface and makes it available to the market.

My efforts will concentrate on the following tasks, all of which aim to enhance the user experience of the OBS mobile interface to help developers create, collaborate, and release software more efficiently.

1. list and review all submit requests related to a user

Adding a filter function might be helpful, too. An “exclude projects” toggle in the mobile interface front-end would be a good start. This could be a specialized implementation of an --exclude-projects-matching <regexp> - and then the user will have a --search-only-matching <regexp> option for symmetry.   2. Project / package view will include the following tabs:

4). Related packages: list which packages (include version numbers) in the commit history of a package that will trigger it to rebuild.

3. Enable time-stamped status updates (like tweets) on a package / project, reflecting the ongoing work on a project / package.This could be a simple mashup of OBS's API and Twitter's API, for example.

1) on the project / package page only

2) on the project / package page and the user's profile page (and perhaps social media if linked).

The user can also choose to show only the current status on checkout or read all the status updates on a package (see use case 1 below).

1. Create a service that polls for build failures and shows notifications / flags.

2. Syncmobile notifications to a desktop client (and possibly send the user an SMS).

Create proper documentation and tests for the above-mentioned components.

A team of four developers are collaborating on a game project.

1. Jesse is updating UrbanTerror:Workbench:Factory to 1.2 and disables publish on the whole project until the actual release date. He posts a status message on the OBS mobile interface,which also updates his linked Twitter account: “04/03/2011 12:56pm  Disabled publish pending1.2 release.”

2. Craig wants to find the libzypp/zypper backport repository. He searches for “zypp” with a category of “backport,” which immediately returns the repository he was looking for.

3. Tracy is interested in checking out a project, and she sees the current project status is shown to be “testing.” She thinks it might be a better idea to stop back a few days later to check out a stable version of the project.

Ted would like to add a chat feature to “Spring Engine,” so he submits a request from his Android phone. He tags this request with “spring engine.” While the request state is pending, Tedshares his request on his Twitter account and blog status (which he has previously linked), inviting more developers to join the discussion. A day later, he receives an SMS notification on his Android phone, alerting him that his request has received two votes from the community and three developers have joined the discussion. Two days later, Ted receives another SMS saying his request has been accepted. He taps to share more design ideas on Twitter and encourage more community discussions.

Andy opens up the OBS mobile interface on his Android phone, searches requests with the tag “desktop,” and sees two full pages ofsubmitted requests. He wants to see the latest request, so he sorts the requests by submit times, and finds the most recent request was submitted two weeks ago with a proposal to enable Dolphin open PERL documents in Kwrite. This request status is “unconfirmed,” and Andy is interested in the latest accepted request, so he goes back and sorts the requests again by their statuses. The latest accepted request is “Update of KDE integration to KDE4 in openSUSE 11.3.” Andy reads the discussion and finds the newly added OOo quickstarterinteresting, and he decides to check out the package with a simple tap on his phone. +++

1. This project will help developers create and release projects / packages more quickly and conveniently through the OBS mobile client on their Android devices.

2. This project will greatly promote communication and collaboration among developers.

3. This project will also help make it easier for developers to deploy projects / packages to clients by configuring the mobile interface to their needs. +++

1. Implementing the entire user interface in a mobile phone might be too time-consuming. We might consider doing this primarily for the parts where a phone makes a good tool for the buildservice.

2. Be careful with version controls, merge conflicts, etc. We might consider preparing changes in a branched project and then requesting to have the changes merged back.

3. Default.properties, a file automatically generated by Android Tools, should not be modified, or changes will be erased.

4. Developers working on this project should be using the same versions of technologies to ensure consistency and compatibility.

5. The app might be slower than if it had been developed in the native way. The app size might be a concern.

6. In Android, most of the time, for each page navigation, the developer will have to add an activity indicator, if there are a lot of controls in view.

7. The web browser-based UI might seem foreign compared to any native UI, e.g., the app may not look like an Android app on Android, or an iPhone app on the iPhone, etc. It will be something unique, but also foreign and unfamiliar in terms of look and function.

8. The mobile UI needs a browser-based (or rendering-engine based) test-suite besides unit or fuctional testing.

9. There is no easy solution when an app doesn't deploy properly on a platform or individual device.