The ALP Installation work group is researching ways to evolve the current (open)SUSE installer. D-Installer is the provisional codename for the prototype implementing that evolution of YaST.

D-Installer is an effort to build a web-based installer on top of YaST libraries using Cockpit as a frontend. It requires important architectural changes to YaST, including the development of a D-Bus interface.

Using YaST as a backend has a big advantage - It can easily implement backward compatibility and the code and knowledge already exists. Exchanging components later should be much easier. In that regard, the YaST components of D-Installer will not run as a single monolithic process (like the current YaST), but as a set of pieces running independently and offering their own D-Bus APIs. 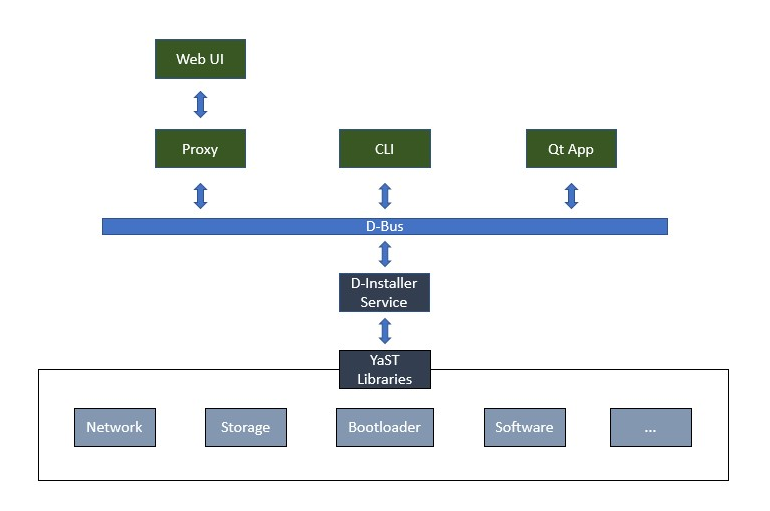 You can find further information in the pages below:

D-Installer is not so different from YaST in terms of general operation. That is, it's an application that runs on top of a running Linux system (what we usually call the int-sys) and does:

But to be really useful there are several aspects such a installer should fulfill:

Unresolved questions with this approach

The vision states that there should be no difference between interactive and unattended installation. But often some kind of logic in needed in that unattended installation. We already see that in AutoYaST, where many users dynamically adjust the process using tools like pre-scripts, ERB templates or rules/class. In all cases, the goal is the same - making configuration dynamic depending on hardware/other conditions. As a very simple example, let's say the user wants to select in unattended installation the second biggest disk (as the biggest is selected by automatic proposal and the user wants to use the other one as the biggest one containing data).

The way to cover those cases is not so clear in the vision expressed above.