Jump to: navigation, search
Unison is a synchronization tool that is very similar to rysnc. In fact, it uses the rsync algorithm, so it works just as efficiently. The advantage that unison has is that it is designed for two way synchronization of data. This is very useful for synchronizing content between load balanced servers or for synchronizing files between personal computers. Unison provides a GUI-based interface or can be executed via the command terminal. Unison is available from the default openSUSE repositories.

Usage is similar to rsync. By default, it will prompt for confirmation of any changes to be made.

Note: if unison is launched in a terminal emulator (e.g. konsole, GNOME Terminal, etc.), to have unison running straight in text mode the commando should be launched with the -ui text option (not needed if running in a real console).

It is important to note that the same version of unison should be used on both machines when synchronizing remotely.

A complete list of options can be found in the unison documentation at http://www.cis.upenn.edu/~bcpierce/unison/, or locally in /usr/share/doc/packages/unison/unison-manual.html. 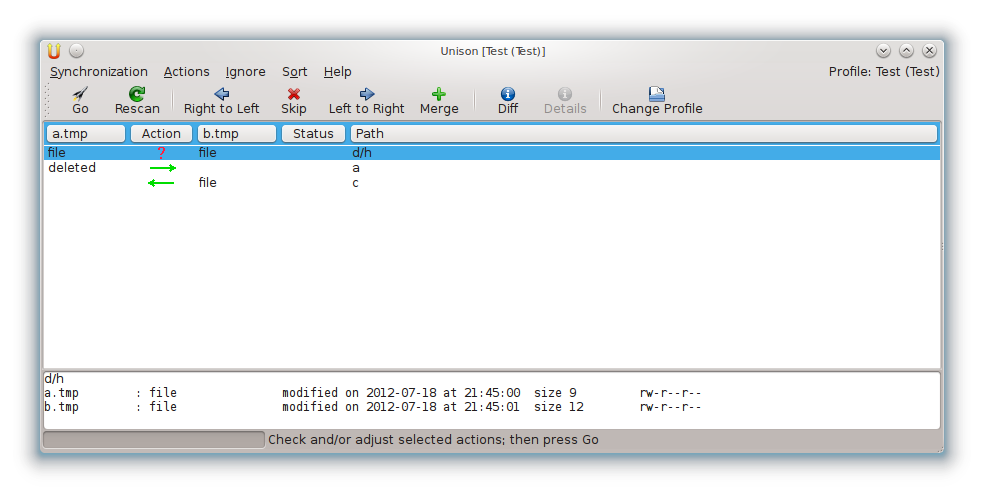 Unison showing up possible actions for a subsequent synchronization
Retrieved from "https://en.opensuse.org/index.php?title=Unison&oldid=61973"
Categories: