NX is a remote access protocol. It is both fast, secure, graphical and open (as opposed to the Telnet protocol, which is only fast and open).

NX is basically a client-server protocol, that allows you to graphically access any machine, It is based on both SSH (for security) and X Compression (for GUI and speed), and NX is much easier to use than normal X protocol.

This How-To describes how to use SUSE Linux 10.0 as a Terminal Server, how to configure stuff, and how to connect to it.

After NoMachine created NX a few years ago, they released their core libs and commandline tools to the public (as GPL). Kurt Pfeifle - a KDE contributor - took those libs and tools and created a first humble (unreleased) script that automated the setting up of a remote NX connection to a degree. After Kurt introduced Fabian Franz (at the time a contributor to Knoppix and MPlayer) to NX, Fabian created a project called FreeNX; FreeNX is a work-alike implementation of NoMachine's commercial (and closed source) NX Server.

NoMachine still releases their core libraries under GPL, gives away their NX Client and grants free binary redistribution rights for it. Their client can be used to access FreeNX servers.

We - the community - can use the GPL'ed implementation of the FreeNX server and the KDE "knx" client (though that one does still miss many features and lacks maintenance).

There's also the GPL-ed client for the 2X server (another commercial product by a different company that uses the NX core libs) that is supposed to work with FreeNX.

There's a known bug (Bugzilla #615164). Due to a change in SSL. After the installation like described for 11.1 and 11.2 the following line must be added to /etc/nxserver/node.conf:

On 64bit systems you may run into this:

and rerun the install

A problem which regularly occurs is that you have to try to make the connection a number of times before it succeeds. You can solve that by introducing a "sleep 4" in the script /usr/bin/nxnode

Insert the first 3 lines in the above textblock just before the last line in that block.

Another problem is that the arrow keys do not work or have an unexpected action. The solution is to add the text

in a line which contains:

insert the text with client above right after the text above. The line above is only part of whole line.

There is also a report that after installation the owner of the file /var/lib/nxserver needs to be changed by giving the command:

Another report is about the creation of the user nx, which is created as a disabled account which prevents it from giving access via public key authentication. The reported solution is to give the account a password using the command:

after that you will be prompted for a password which can be anything, however you have to type it twice.

If you have create a special group (say ssh_group_user) for ssh user ( following some forums recommendation ) and have configured /etc/ssh/sshd_config for these users by adding :

You have to either do modification (a) or (b)

Edit /var/bin/nxsetup. Near line 274 and change search for :

And Replace utmp by the name of your ssh user group (ssh_group_user as in my example) .

The FreeNX package is no longer present in the official openSUSE 11.2 repositories. However the packages are available in the Build Service.

Replace 11.2 with 11.1 with the version of openSUSE you are running.

If you are, like me, running SUSE Linux 10.0 - you will need to install FreeNX package (the server) using YaST (freenx is on SUSE CDs/DVD) as well as some client software (to test on local machine) - you can use freeware NX Client (from www.nomachine.com/download) or use Open-Source "knx" - the standard KDE NX Client.

After setting up the procedure is damn easy.
First enter root mode, then:

1) let's make sure that you installed the right package:

If it returs nothing, then install it using YaST. If returns "FreeNX-0.4.4-4" like in my case, then all is OK.

2) This will configure the FreeNX server: (using the standard key)

At least in openSUSE 11.1 you will see some checks done. Some will fail but may be harmless unless you want these features working. At the end a test session will be done which should succeed. You may want to save the output of nxsetup in a text file for later reference.

3) start any NX client - I use NoMachine's - and type: localhost as my host, 22 as my SSH port - after all NX is based on SSH, my user's name & password, desktop: UNIX/KDE set the resolution press ok - and - everything works wonderfully ! 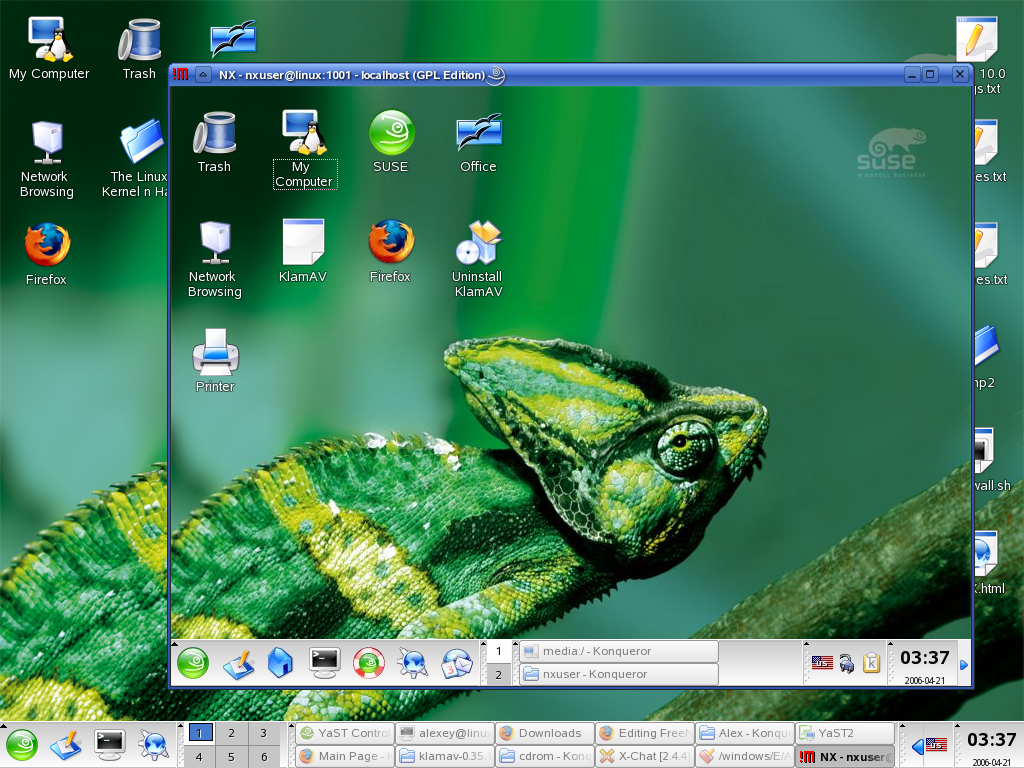 The next paragraphs are strictly optional for Advanced NX configuration. You don't need to read them to make NX working.

In the real world, running a Terminal Server requires more than just configuring NX Server - it also requires to configure users on the server. On SUSE Linux it's easiest to do with Yast. Now we need to configure the clients - there are two ways for achieving this:

2) Use LiveCD that comes with NX Client. Newer Knoppixes do. v3.9+.

NOTE2: FreeNX as a Terminal Server is great, because it's very fast, secure, and the software is not the limited to the number of clients -- your only limitation is the power of your Server. (that is -- the performance of your CPU & amount of RAM)

3) Use discless distributive, such as thinstation or 2x.com.

A note about NX clients

There are two NX clients in existence - namely:

b) and an open-source KDE "knx" client. Simple Client.

Each is supported on different platforms:

A Server can be Linux or UNIX host only.
SUSE Linux 10.0 is very well supported. Another UNIXes/Linuxes might need to compile stuff.

Using KDE3 if KDE4 is installed

If you wish to connect to a KDE3 desktop remotely, add the following line to the /etc/nxserver/node.conf file:

Because changing NX port on the client is straightforward - I will concentrate on the server here.

Since FreeNX server is based on SSH, changing NX port will require you to change SSH port as well, or NX will fail. The default TCP port of SSH and NX is 22. The configuration files on SUSE Linux 10.0 are:

...and don't forget to restart the SSH service afterwards.

By using this technique - you can effectively setup a farm of Linux distros even on your home PC - using some kind of virtualization (VMware/Qemu/Xen) - by setting up virtual NX servers to listen on different ports. This is really cool - because it can be used from both a LAN and from the Internet at the same time !

The NX Server can run in runlevel 3 or 5. NX Server doesn't use video card, so it will work.

NX Client will require you to use runlevel 5. (*Applicable only if you run NX client on SUSE Linux - since Windows has no runlevels concept)

To find out in which runlevel you are working now, use:

The NX Server requires a small modification of /etc/nxserver/node.conf as root to allow NX clients to use other keyboards settings than the US (QWERTY) one:

Locate the line in /etc/nxserver/node.conf reading:

And change it to read:

Restart your NX Server with:

Then reconnect your NX Client and that's it. You should now have a working international keyboard.

These instructions work on SLED10 SP2 and SLES10 SP2, with the following additional setup steps:

These instructions work on SLED11 (should also work on SLES11, but untested), with the following additional setup steps: