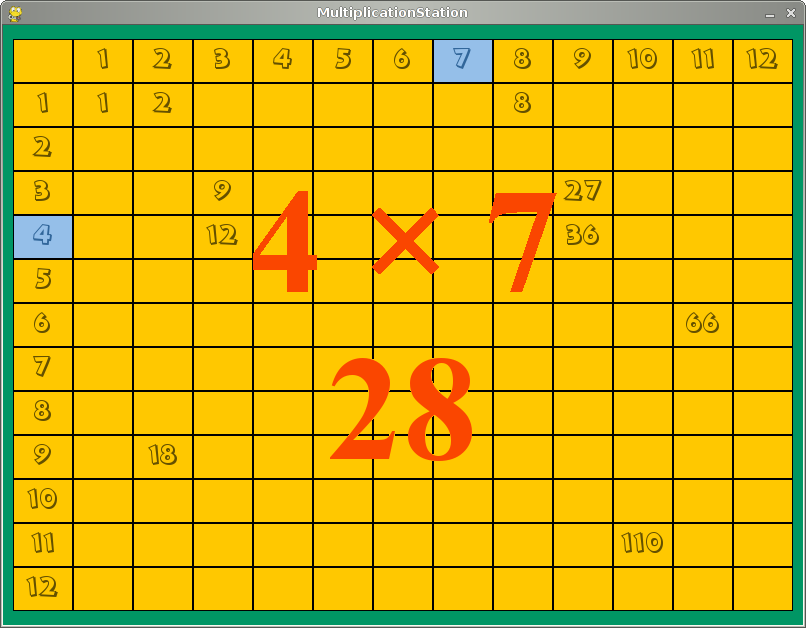 Teach your child to add, subtract and multiply ... Guaranteed!

The application allows the instructor to configure upper and lower limits of the rows and columns of an MxN grid (M-rows, N-columns), as well as which operation to use (addition, subtraction or multiplication). The default configuration is a 12x12 grid for multiplication, but this can easily be re-configured to any ranges and dimensions. The application features a configurable countdown timer to discourage laziness, and a high-score manager to encourage friendly competition. Using the countdown timer in conjuction with large numbers is an effective way to compel students to mentally compute triple-digit sums without paper and pencil.

Add this repository with Yast

To install Multiplication Station issue the following command in a terminal as root:

This will grab the application and all its dependencies from the Internet, so you need to be connected to the Internet. After installing, you can run the program under the menu:

Or press ALT+F2 on your desktop (or go to a terminal like gnome-terminal and konsole), type MultiplicationStation, and press Enter.

After starting the game, click on Play and type answer for shown equation, then confirm it by pressing the Enter key. Program is using configurable countdown timer to discourage laziness, so you have to give answer as soon as possible, otherwise you'll fail a try. Incorrect input can be edited using Backspace key.

The game ends when there is no empty cells in the grid.

The default configuration is a 12x12 grid for multiplication. You are able to just start the game and play, but if you're willing to tweak the game, then there are two ways to go: The Admin button in the game and the configuration file located in $HOME/.config/MultipicationStation (where $HOME is your users' home directory).

Basic configuration can be done in the Admin mode. Just run the game, click on Admin button and you can:

There are some options accessible by pressing keyboard keys: