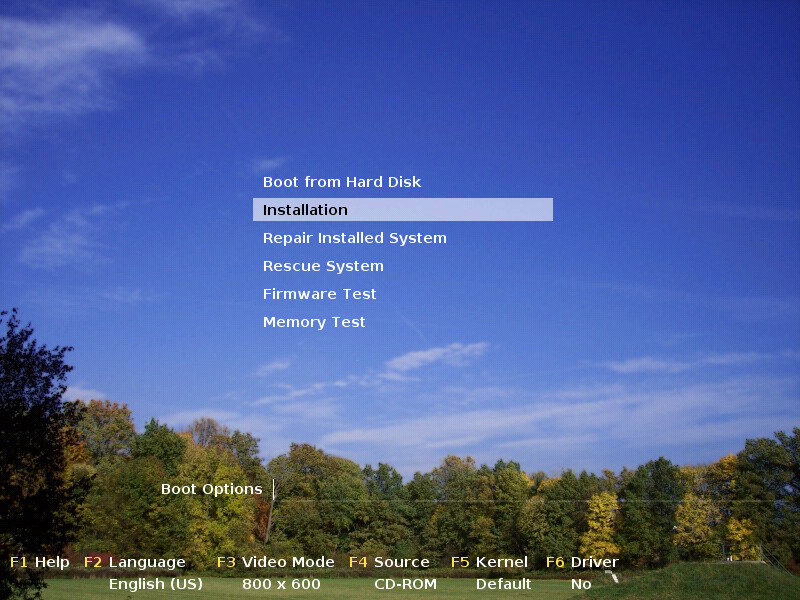 The graphical boot screen in openSUSE is an extension to the usual text-based bootloaders grub, lilo and isolinux. From a user perspective there is no visible difference between them. This article describes how to configure and modify the boot screen.

You'll need package gfxboot (is normally installed on openSUSE) and for some of the examples below you will need gfxboot-devel, qemu and syslinux.

Bootloaders, such as grub, have been adapted to support both graphics and animations. The graphics and animations are contained in the archive file /boot/message, assuming, of course, that the partition used by the bootloader is mounted on /boot. /boot/message will be found automatically by a compatible bootloader according to its configuration file.

The gfxboot-devel package and a virtual machine provider package, such as qemu is required to develop and test new themes.

There are only 2 themes supplied with openSUSE [at 11.0], namely openSUSE and upstream.

This theme is full featured, with an animation for a countdown timer and a penguin animation which appears randomly, with a probability which can be set between 0 and 100%. [to see the penguin animation, set penguin=1 in gfxboot.cfg file within the /boot/message archive as described below and reboot]. The openSUSE theme also compiles with the gfxboot-devel package.

This is a partial theme, with alternative graphics that can be substituted for the openSUSE theme using gfxboot. It does not compile with the gfxboot-devel package.

Deciding how to go about configuring your boot screen

In a single user environment, it will be enough to work with the default openSUSE theme as packaged in /boot/message. You can use either cpio or gfxboot to access the archive. Both these approaches are described below.

This will probably provide enough scope for most users to achieve the desired boot screen.

gfxboot-devel will allow animations with some complexity to be created. An example would be the penguins animation in the openSUSE theme.

A full description of gfxboot-devel requires a separate article. However, in the absence of this, the available info resources are

Creating a new theme with gfxboot-devel is not for the faint hearted. If you have programming skills, however, you may be able to get started from the command line by using the Makefile in the openSUSE theme:

The boot screen is a cpio archive, usually /boot/message in the installed system and /boot/i386/loader/bootlogo on DVD. This archive must contain all files gfxboot needs (except when using isolinux, see below).

to lilo.conf. lilo detects automatically if /boot/message is just a text file or a gfxboot archive.

isolinux is the bootloader used on DVD. The main difference to grub and lilo is that gfxboot can read files directly from DVD. So not all files have to be in the gfxboot cpio archive. Only the gfxboot core (usually named init) needs to.

The gfxboot archive /boot/message is a usual cpio archive. You can in principle look at it with

unpack it to the current directory with

and repack it with

But to make things easier there is the gfxboot tool. Here are some basic commands:

There are a lot more commands. Try gfxboot --help for a complete list.

As mentioned before, using isolinux has the advantage that gfxboot can read files directly from the ISO9660 filesystem (note: no Rock Ridge extensions). In this case you can pass the directory with the gfxboot files as argument to gfxboot.

E.g., to try a new background picture you can do:

gfxboot currently reserves 8 MB for itself. The archive is loaded into this memory at startup. So it should be somewhat smaller than 8 MB to leave enough free working space for gfxboot.

Older version of gfxboot had significantly tighter memory restrictions. But I hope 8 MB is enough for typical use cases.

A lot of internal variables can be modified by editing the gfxboot config file gfxboot.cfg. The file uses a typical INI-file syntax. If you don't want to edit it directly, gfxboot has some options to help you:

Note that there is no option to create a section. Sections are automatically created when you add a variable to it. See the screen size example below.

gfxboot comes with different themes. To save space /boot/message does not contain all files (e.g. not all translations). The complete set of files for a theme is installed in /usr/share/gfxboot/themes/<theme>. But if you simply using gfxboot to update /boot/message, then most useful files can be found in /etc/bootsplash/themes, although the bootsplash files are intended for providing a graphical screen while the kernel boots and for the console login screen.

You probably don't want to reboot to review your lates changes. Luckily gfxboot has a test feature build in. A virtual machine must be installed for it to work (qemu works best, but vmware, vbox or bochs are supported, too).

Simply add --preview to your gfxboot command. This will take your boot screen, put together a mini system and run it in a virtual machine.

If you add --test as well, no changes are made to your original boot screen config.

shows you the penguin theme without modifying /boot/message.

If you have several themes installed, you can switch to theme foo by running

There are quite a number of languages supported but not all are added to the gfxboot archive.

adds German, French and Japanese and sets the default language to Japanese.

To switch to a Czech keyboard mapping, do:

The background picture is named back.jpg. You can simply replace it (must be jpeg image): 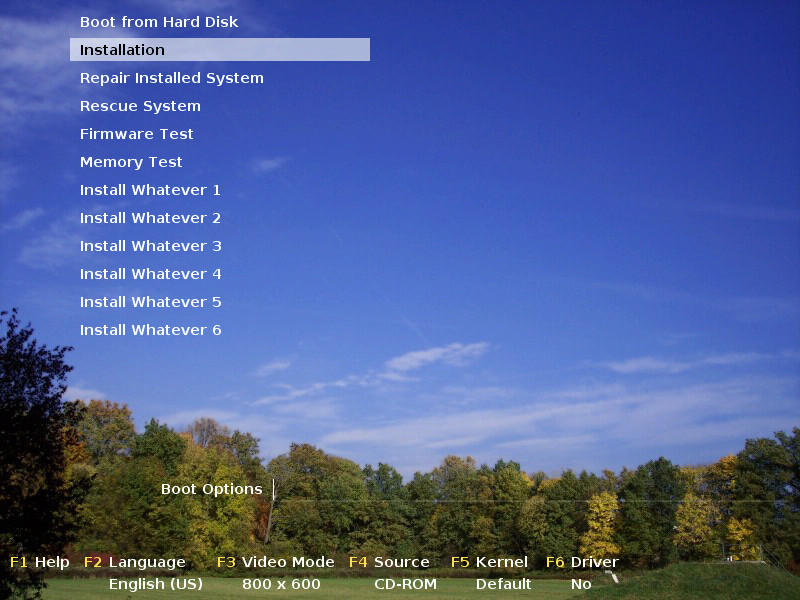 Maybe you like the menu more to the left:

Normally, only 8 entries are shown at a time (you can scroll for more). If you want more, do, e.g. 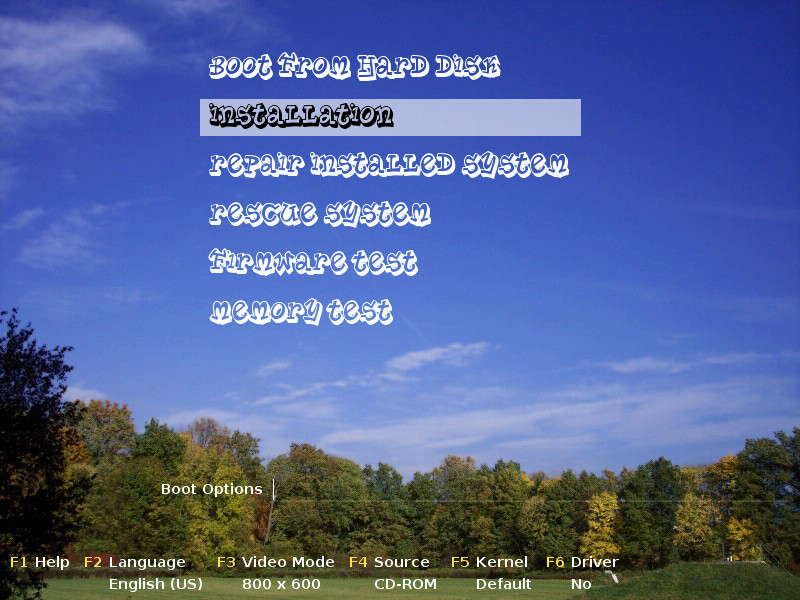 Replacing the font is a bit tricky if you want it to include the glyphs for all supported languages. If you need only typical european scripts, however, it is quite easy:

This gets the glyphs from font 'Planet Benson 2'. You can use every font FreeType 2 can render. Note that you have to give the real filename as argument, not the font name. In this case planetbe.ttf from the free-ttf-fonts package.

The log file is useful for debugging. It shows from which font the glyphs have been taken and how they look like.

Now that you have the new font, you can use it: 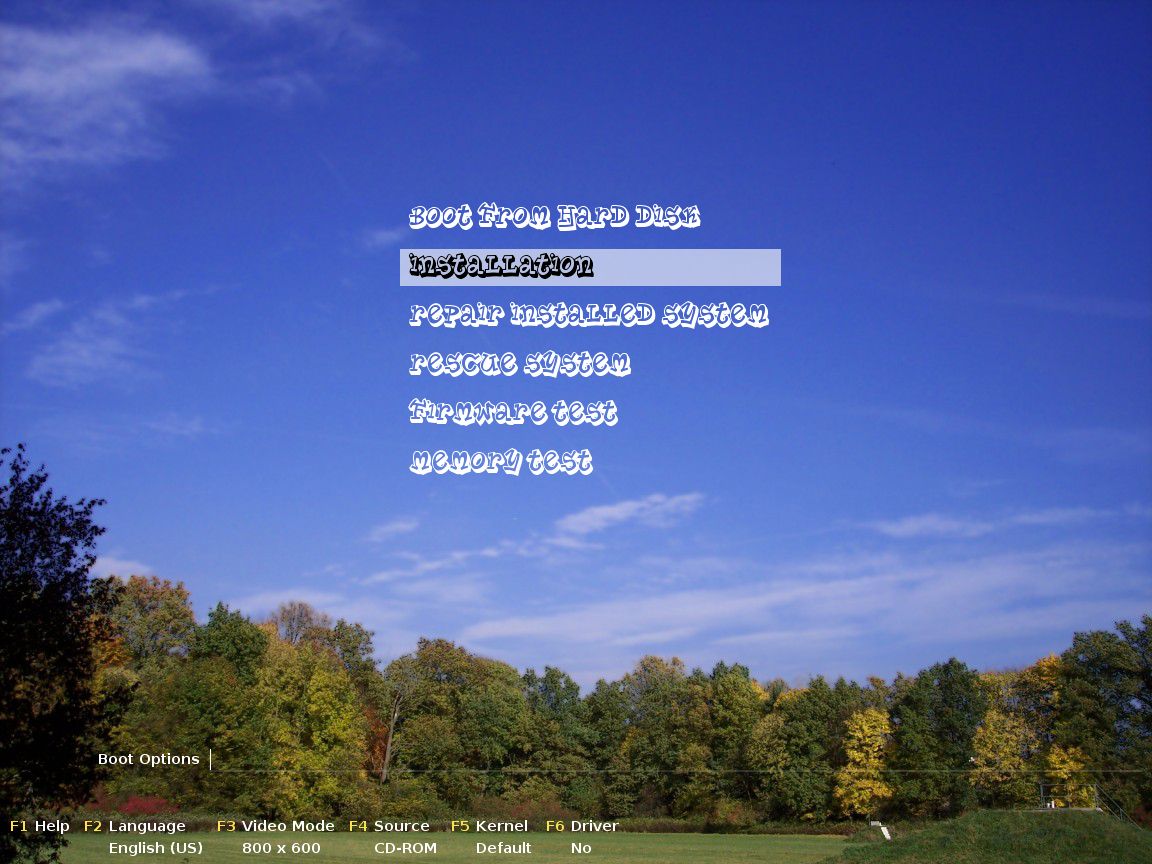 gfxboot relies on the VESA Video BIOS for setting a video mode. So please be aware that not all screen sizes you have on your KDE or GNOME desktop are available. If in doubt, check

for a list of modes. gfxboot prefers 24 bit modes but will fall back to 16 bit modes if no suitable 24 bit mode is available.

Create a new section in gfxboot.cfg for your new screen size:

If you look at the pictures above you will see that although isolinux.cfg has just labels like rescue, the graphical screen shows Rescue System. That's because there is an internal list of menu entry strings it should replace.

If you don't want to recompile the theme there are two ways to influence how gfxboot prints menu labels:

Note that you will almost certainly need a file translations.en with the second method.