Jump to: navigation, search
DOSEMU stands for DOS Emulation, and allows you to run DOS and many DOS programs, including many DPMI applications such as DOOM and Windows 3.1, under Linux. A virtual machine (the DOS box) provides the necessary BIOS functions and emulates most of the chip devices (for example: timer, interrupt, and keyboard controller).
dosemu 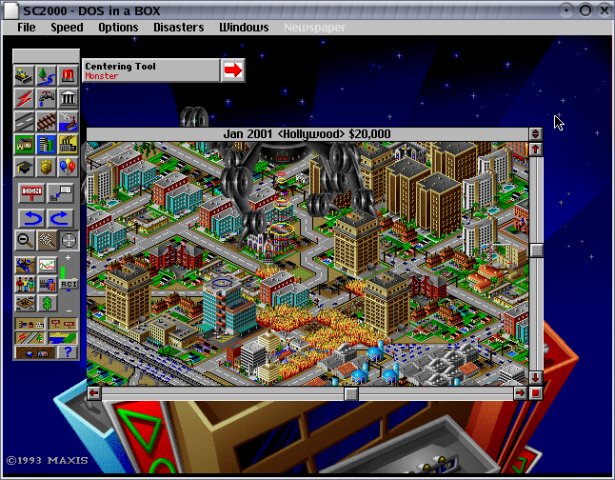 You can start DOSEMU using

If you have never used DOSEMU before, and FreeDOS is present, then DOSEMU will boot, and present you with a welcome screen and a C:\> command prompt.

If for some reason it does not start, or DOSEMU crashes somewhere, look at ~/.dosemu/boot.log for details.

Starting with version 1.0.2, DOSEMU configuration files are no longer in /etc but in the user's HOME directory in ~/dosemu. DOSEMU no longer has the SUID bit set, so if you need access to hardware that requires root privileges, you must run DOSEMU as root.

Remember, that you can't use <Ctrl>-C within DOS to exit from DOS. For this you need to execute exitemu or, when using the 'DOS in a BOX' <Ctrl><Alt><PgDn>.

Your DOS drives are set up as follows:

There exist various ways of starting DOSEMU, depending on the environment and certain command line options. By default, in X, it will start using a special 'DOS in a Box' which provides a usual PC setup, using a 80x25 text mode. It also supports graphics. The box can be rescaled by dragging the window borders using the mouse.

However, in certain situation you may want to use a different mode.

Terminal mode is automatically entered if you do not have X available, for instance when logging in remotely from a Windows system or at the Linux console. You can force it using:

In this mode the display of graphics is impossible, but you can use full-screen DOS text mode applications. It is advisable to give the terminal window a size of 80 by 25 characters, or use "stty cols 80 rows 25" on the Linux console, before starting it because many DOS applications are confused about other sizes.

You can use the $_internal_char_set option in ~/.dosemurc or /etc/dosemu.conf to change the code page that DOSEMU thinks that DOS is using.

For DOS applications that only read from standard input and write to standard output, without any full-screen usage, you can use dumb mode. To use this you must invoke DOSEMU like

this has the advantage that

You can start dosemu with the "-S" option to use the SDL library. In X it will just look like a regular DOS in a Box but with a different shaped text mode mouse cursor. You can also use this mode on frame buffer consoles.

Console graphics mode is the hardest to setup and may potentially lock up your system, but if it works it gives you direct VGA hardware access which may be quicker and more accurate than the emulation used in X.

Warning: If you need access to hardware that requires root privileges, you must run DOSEMU as root!

If you rely on the old configuration scheme, you can get it back by using dosemu.bin instead of dosemu (dos and xdos have been renamed to dosemu and xdosemu).

which will automatically cause the DOS in DOSEMU to